“If they can dream it, they can build it,” says architect and engineer Madhu Thangavelu. This is the essence of Dreaming Up, a unique picture book that intuitively connects children’s natural impulse to create and build to an understanding and appreciation of innovative works of architecture. Illustrations of children at play using stacking cups, wooden blocks, Popsicle sticks, Legos, snowballs, sofa cushions, and more are paired with lively concrete poems and shown opposite notable works of architecture from around the world that look as if they were inspired by the children’s simpler creations.

The book is further enhanced—especially for older readers—with backmatter that includes descriptions of the buildings depicted and architect biographies, portraits, and quotes.

Dreaming Up sparks learning activities on many levels. Here are just a few of the possibilities: look for shapes in the illustrations and photographs; provide building materials for children to build their own structures; learn more about the buildings pictured and the architects who designed them; meet and talk to a practicing architect; explore careers in construction, building, engineering, and architecture.

Come be inspired to play—dream—build—discover! 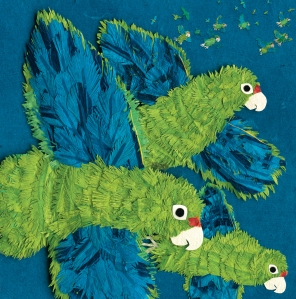 Kids care about animals. Kids care about the environment. Parrots Over Puerto Rico engages these interests with stunning collage illustrations and high-interest narrative that is both poetic and scientific. This book presents a fascinating look at the beautiful, raucous Puerto Rican parrots, their environment, and the efforts that have been made to ensure the future of these endangered birds.

Above the treetops of Puerto Rico flies a flock of parrots as green as their island home. They lived on this island for millions of years, and then they almost vanished from the earth.

For centuries beautiful, Puerto Rican parrots and the settlers on the island of Puerto Rico hunted for food, survived hurricanes, raised their young, and protected their homes. But then things began to change, and in time the trees in which the parrots nested were destroyed. By 1967, only twenty-four Puerto Rican parrots were left in the wild. Humans had nearly caused their extinction. Could humans now save the parrots?

Readers will come away with an appreciation for Puerto Rico, its rare parrots, and the dedicated scientists who work to keep Puerto Rican parrots flying over their island home. The book is a “triumphant reminder of the inescapable connection between people’s actions and the animals in the wild.” (Booklist)

Copyright © 2013 Louise May. All Rights Reserved.