Booktalk: Learn how to use Swift to write programs, even if you’ve never programmed before. Anyone can use Swift to make cool apps for the iPhone or iPad. Once you master the basics, you’ll build a birthday tracker app so that you won’t forget anyone’s birthday and a platform game called Schoolhouse Skateboarder with animation, jumps, and more!

You’ll work in the Xcode playground, an interactive environment where you can play with your code and see the results of your work immediately! You’ll also learn the fundamentals of programming, like how to store data in arrays, use conditional statements to make decisions, and create functions to organize your code–all with the help of clear and patient explanations.

Booktalk: From the eastern bluebird and blue jay to the scarlet tanager and northern cardinal, little ones will discover the natural world and learn the names and colors of birds in their natural habitats in this board book. The color word appears large and bold, and each bird is labeled by name, as are flowers, fruits, and foliage.

Up! Up! Up! Skyscraper
written by Anastasia Suen; illustrated by Ryan O’Rourke
2017 (Charlesbridge)
Source: Review copy provided by the publisher

Down, down, down!
Bars of steel.
A building’s bones
Make it real.

From the ground up, this is a terrific book. It explains, in sequence, how skyscrapers are built. On each spread, there are two sets of explanations of each step. The big bold print in the upper half is a quatrain with the second and fourth lines rhyming. This will be great for shared reading for a whole K-1 class or a small group. On the bottom half, there is a smaller print that is more like an informational text for older readers. I like how the different texts target a wide range of readers. Plus, there are labels and inserts that add details and show how pieces fit. These touches show that author Anastasia Suen is well aware of the needs of her audience. Ryan O’Rourke’s art work is eye catching with bright colors and sharp lines that add to the reader’s understanding. I love the end piece which is a foldout of the skyscraper. In addition, if you click this link, you can print pages to make a flip book of the building of the skyscraper.

Up! Up! Up! Skyscraper takes a subject that is intriguing to students yet difficult to explain and makes the explanation engaging and simple to understand. That is not easy. Did you know how skyscrapers are built? I had a general idea, but this book helped me fill in a lot of missing pieces. Kids will love sharing the details they learn with their friends and parents. For very young readers who like buildings and transportation (and there are many!), I can see the quatrains being repeated often as a bedtime read aloud. This book is also good for a social studies unit on cities and comparing them to rural areas. For the students that I work with, this is a valuable resource as most of them have never seen a skyscraper. Up! Up! Up! Skyscraper is floors and floors of fun informational text.

Booktalk: In 1995-96 twenty-three grey wolves were released in Yellowstone National Park where, due to over-hunting, there had been no wolves at all for almost seventy years. This reintroduction project was an overwhelming success. Over twenty years later we can still see the changes the grey wolves brought to Yellowstone National Park. Now that the elk graze higher ground, seedlings are growing tall, rivers are getting deeper as beavers return, and a lively pond ecosystem is developing. This true story offers an important lesson about the difference one creature can make in creating a healthy, thriving world.

Two Truths and a Lie

When a nonfiction book begins with a warning that some of the stories included are not true – you know it’s going to be a wild read. The thing is, the authors point out, there are lies all around us. Truths, too. Anyone trying to keep up with political news knows that sorting fact from fiction is really important.

But lies aren’t partial to politics; you’ll find plenty of shady stories masquerading as scientific truths. Like stories about a fungus that infects insects and takes over their brains, creating bug zombies. Oops – that IS a true story.

What Laurie and Ammi-Joan (who likes to go by Joan) do in their book is play a game with readers. They present three wacky science stories and challenge you to figure out which one is fake. For example, one group of three animal stories features a chicken who lived without its head – and performed in a circus sideshow, a cave-dwelling salamander that looks like a dragon, and a tree-dwelling octopod that lives in rainforests.

Which two are true? Which is the lie? They tell you at the back, and give lots of source notes for the stories so you can do your own research. They also include a few words about how to tell truth from lie when reading articles online and in the paper. It’s like a guide to finding facts in the news world. 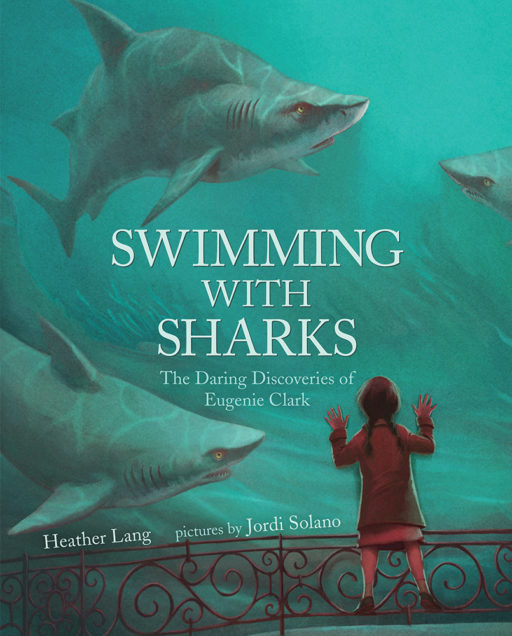 Genie knew the more she discovered about sharks, the less people would fear them.

Eugenie “Genie” Clark saw the world of sharks differently than most people. They looked with fear while she looked with wonder. As a young girl, she dreamed of swimming with them. Later, Genie got a master’s degree in zoology and an opportunity to research in the Pacific Ocean. She was hired by the US Navy to study poisonous fish in the South Seas in 1949. It was here that she encountered a large shark. This close rendezvous increased her love of these mysterious creatures. Six years later, Genie opened a lab in Florida and added a shark pen where she was the first to study sharks in their natural habitat. She even went so far as to train a pair of lemon sharks. As her work continued, she earned the nickname of “Shark Lady”. Her extensive research underwater led her to discover that shark numbers were decreasing. Genie made of mission of reaching out to the public and educating people about these glorious animals in order to save them. She continued her research until her death at age 92. In the Author’s Note, readers learn that Genie “published over 175 articles about fish and made seventy-two submersible dives.”

What a fascinating life and book! If I were introducing the scientific method (and we all should be), I would use Swimming with Sharks as one of my resources. Genie Clark is shown always observing and taking notes. I like how pieces of Genie’s notebooks are included in the illustrations. In this world of hot takes and snap judgments, I love that we have a heroine who thoughtfully studied her subject. We need to encourage this more and more. And what a great figure for a class wax museum! A student could wear a mask and flippers as they talk about Eugenie Clark’s research. Swimming with Sharks is an excellent picture book biography.

Booktalk: What kind of dog works with the police? Sniffs for explosives? Keeps us safe when we travel? Law enforcement dogs! K-9 law enforcement dogs play an important role in communities everywhere. These furry friends can learn how to sniff out evidence and catch criminals. Find out what these four-legged officers do to help keep us safe!

The Marvelous Thing That Came from a Spring : The Accidental Invention of the Toy That Swept the Nation Hardcover
by Gilbert Ford (Author / Illustrator)

Booktalk: One day, a spring fell from the desk of Richard James, an engineer and a dreamer. Its coils took a walk…and so did Richard’s imagination. He knew right away that he had stumbled onto something marvelous.

With the help of his wife, Betty, Richard took this ordinary spring and turned it into a plaything. But it wasn’t just any old trinket—it was a Slinky, and it would become one of the most popular toys in American history.

Karl, Get Out of the Garden! Carolus Linnaeus and the naming of everything

Karl Linne was in the garden again. He just wouldn’t stay out of it!

Karl, get out of the garden!

Karl’s mom dreams that he’ll become a lawyer, or perhaps a minister. His father thinks he should apprentice to the shoemaker. But Karl loves spending time in the garden. He loves learning the plants, and watching the insects. So he tells his father that he wants to go to medical school.

Once there, he begins learning how to use plants for healing. There’s a big problem though: with so many names for plants, how does he know which is the correct plant to use? Karl decides that what the world needs is a consistent system for naming plants (and other living things) – a system that will help organize life.

What I like about this book: It’s a fun way to delve into the history of science, and also learn why we have scientific names for plants and animals. I also like that author Anita Sanchez includes some of the controversies about naming species – especially the idea of including humans. Imagine! Naming humans as if they were just another animal! Worse yet – lumping them in with mammals like groundhogs and cats! The very nerve!

Today I’m sharing books about plants and gardening over at Archimedes Notebook. Head on over for more book reviews and some hands-on activities.