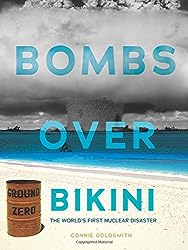 Booktalk: In 1946, as part of the Cold War arms race, the US military launched a program to test nuclear bombs in the Marshall Islands of the Pacific Ocean. From 1946 until 1958, the military detonated sixty-seven nuclear bombs over the region’s Bikini and Enewetak Atolls. The twelfth bomb, called Bravo, became the world’s first nuclear disaster. It sent a toxic cloud of radiation over Rongelap Atoll and other nearby inhabited islands.

Snippet: “I began to feel a fine powder falling all over my body and into my eyes. The coconuts changed color. By now all the trees were white, as well as my entire body. I didn’t believe this was dangerous. The powder fell all day and night over the entire atoll of Rongelap,” Moyor John Anjain later recalled.

From her studio in Northern California, developmental editor Anastasia Suen reads, writes, and edits books for creators of all ages.

One thought on “Bombs over Bikini: The World’s First Nuclear Disaster”