Here is another article, about great teaching, that Roberta recommended. Again, someone is daring to be different and trying to rise above the tide of mediocrity that we are currently swimming against. This comes from Wired Magazine and features teacher Sergio Juarez Correa and the terrific work he is doing.

Why Do Americans Stink at Math? is a terrific piece penned by Elizabeth Green. Here’s a great summary of the article from a Facebook friend of mine:
Phenomenal article. Japanese math skills moving ahead of our own, due in large part to teaching methods developed in America, but which we have failed to implement. Allowing teachers to observe one another, open discussion of teaching techniques. Bringing parents up to speed along with students. Teaching the “why” instead of just how to get the answer. A great read!
Elizabeth Green has a book, Building a Better Teacher, that will be published on August 4th. The article is an excerpt from the book.

A Trip Into Space

Many preschool and kindergarten classes have units about careers. Ever thought of featuring astronauts as a career? A Trip Into Space will teach you all about the life of an astronaut working at the International Space Station. It starts with taking a trip from Earth into space. According to the facts in the back matter, these ships travel as fast as 17,500 miles per hour. It takes less time to travel to the space station than to fly on an airplane from New York to California. When you arrive at the space station, boxes have to be unloaded with new supplies for the crew. Fresh fruits and veggies are especially prized as most food on the space station is freeze dried. Accounting for the lack of gravity is a big deal in this floating lab. Astronauts drink out of pouches and have Velcro to hold down their forks while they are eating. My favorite piece of information and accompanying illustration in this book is that astronauts zip themselves in sleeping bags so they won’t float away during sleep. It’s also important to be clipped while you are working outside making repairs on the station. Working two hundred miles high is definitely a trip!

With engaging pictures and an easy narrative to follow, young readers will enjoy their trip into space. I’ve said this plenty of times before, but I’ll say it again: We underestimate how hard it is to write good nonfiction for very young readers that can be read over and over again. A Trip Into Space is the rare nonfiction work that would make a great bedtime story. What better way to send yourself off into dreams? 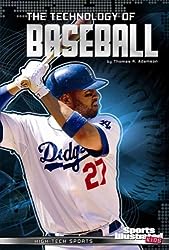 Booktalk: Take me out to the ballgame or just watch the game from your phone! From motion capture technology to software such as GameChanger and PitchTrax, the tech world has become a regular part of Americas national pastime.

Snippet: Tim Lincecum of the San Francisco Giants pitches with motion capture sensors attached to his body. The sensors provide data that will help Lincecum’s delivery look more realistic than a video game.

George Cornelius Factor lives for fractions. He collects them and places them on shelves in his home. So it’s no surprise that when a 5/9 is available through an auction, George is there to bid. Others want this prize fraction as well, so the bidding is fast and furious. George makes the initial bid and is topped by Madame Geometrique and Baron von Mathematik. As the bidding reaches a peak, the room is thrown into darkness. When the lights come back on, the valued 5/9 is gone and so is the mysterious Dr. Brok, who has a shady past. George suspects the bad doctor and immediately starts thinking of a plan. Using parts of a ray gun, a calculator, paper clips, a whisk, and spare computer parts, he develops a Reducer. When pointed at a fraction, it reduces it to its lowest terms. George tries it out on a 10/15. He is able to reduce it to a 2/3. Now it is time to implement the second part of the plan. He goes to the mansion of Dr. Brok. Will he find the precious 5/9? I’ve given you 1/2 the plot so you can find out what happens in the other 4/8.

Fractions In Disguise is 6/6 a clever tale. Students will have fun trying to reduce fractions as they read the book. It’s a great way to introduce reducing fractions, which starts in the fourth grade math curriculum. Adding this math mystery to your math read aloud collection will be one whole good idea!

Check out other book reviews at NC Teacher Stuff.

About a thousand years ago a Chinese monk stuffed gunpowder into a piece of bamboo and tossed it into the fire. He wanted to make a noise loud enough to scare away ghosts.

If you head out to a fireworks display tonight, you’ll get more than a big bang. The designs and colors we see in the sky are a result of chemistry. Inside the fireworks are pellets of the sparkly stuff that burns in the sky. The pattern you see in the sky results from how those pellets are placed inside the firework. They may explode outward in shapes that look like fronds of a palm tree or a brittle star. Or they might snake across the sky. You can read more about patterns here.

The colors come from burning different metal salts: barium chloride for green, lithium carbonate for red, copper compounds for blue, and sodium – like the salt you shake onto your potatoes – for yellow. Here’s a handy color chart.

Have fun on the fourth, and remember: it may look like a fireworks show but it’s Science in the Sky!