Many of us probably learned about chemistry in high school from a textbook (and probably promptly forgot most of it). Isn’t it wonderful we now have popular chemistry books for kids, like Why Is Milk White?: & 200 Other Curious Chemistry Questions by Alexa Coelho and Simon Quellen Field?

The answers to some of the questions might surprise you. When Coelho asks, “Can you change lead into gold?” it turns out that it is possible by bombarding mercury with gamma rays, and the process occurs naturally in stars. Take that, alchemists!

The big advantage of the question and answer format in Why is Milk White? is that readers can skim through and read only the questions that interest them, a plus for reluctant readers. Middle grade readers who are serious science fans, however, will want to read it cover to cover.

For more, see Growing with Science.

Copyright © 2014 Roberta Gibson at Growing with Science All Rights Reserved.

Lifetime shows how many times a particular animal performs one behavior or grows one feature in a lifetime.

I’ve been a sports fan all my life. That means I enjoy numbers and how they relate to performance. Growing up, I knew Babe Ruth hit 714 home runs in his career and cheered with my brother when Hank Aaron hit his 715th home run off Al Dowling. So when I read Lifetime, I was very interested in the numbers and what they could tell me. For example, you can make a lot of inferences with numbers. The first animal featured in this book, the cross spider, spins one egg sac in its lifetime. I think that must be one tough sac if it is going to be the only one that this spider produces. Inside that sac are 300 – 900 spiderlings. An alligator will build 22 nests and lay 550 eggs. I’m going to guess, based on the numbers, that less than 50 percent of the baby alligators survive. If more survived, we would be overrun with alligators. (I found an article at Discover Magazine that said only 10 percent end up growing to 4 feet, which makes them near invincible.) Several other animals, including woodpeckers, rattlesnakes, and dolphins, are featured in this book.

The narrative text in Lifetime is sparse and an easy read for your average second grade reader. I love this because it isn’t so dense that young readers get bogged down. There are great opportunities for teaching sounds like /ir/ as in giraffe and birth. For advanced readers, the extensive back matter will satisfy their curiosity. Christopher Silas Neal’s mixed media illustrations are fun because he uses the numbers in the pictures. Giraffes have 200 spots so Neal illustrates two sides of a giraffe with 200 spots. Kids will love checking to see if Neal holds to form. Lifetime is a nonfiction book that will get worn quickly because it will be passed around several times between classmates. 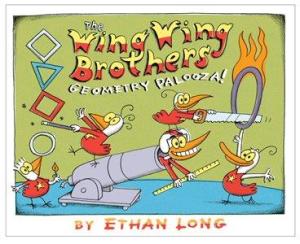 “Walter wheels out the Whammer. Here comes Wendell! Watch him whiz through the air!”

The Wing Wing Brothers are a family circus act of five wacky birds: Walter, Wendell, Willy, Wilmer, and Woody. They do their best to make math painless and fun. Using magic wands and feats of daring they whip those polygons into shape.

Their first amazing feat – Describing Relative Positions – opens with a blast, boom, splat! Their goal: Launch a bird cannonball through a hoop of fire. Then, with a waggle of the wand – poof! Triangles! Squares! Rectangles! and more to amaze you! Of course there’s the “sawing a person in the box” act… which turns out just the way you’d expect and requires special glue…

What I like about this book: it’s silly and a fun way to play with math – as long as kids don’t try these stunts at home!

Head over to Sally’s Bookshelf for some hands-on beyond-the-book activities.

“One day a little meadow mouse was crawling through a field
Staring in amazement at the wonders it revealed.
The grassy open meadow put his courage to the test,
For he had never left the comfort of his mother’s nest.”

This is that coming of age tale of a young mouse. The illustrations give us a close-up view of life in the meadow. We meet a spider and honeybee, and watch a caterpillar metamorphose into a chrysalis. But all is not fun and games in the meadow; there are predators to avoid! I especially like the back matter where we learn more about whether – and how – animals talk, what altruism looks like in the animal world, and what meadows are.

Head over to Archimedes Notebook for some hands-on meadow activities.

Secrets of the Garden: Food Chains and the Food Web in Our Backyard
by Kathleen Weidner Zoehfeld (Author) and Priscilla Lamont (Illustrator)

Booktalk: Alice’s family plants a vegetable garden each spring, and this budding naturalist reports all she sees about how the plants grow, what insects come to eat the plants, and what birds and animals come to eat the insects. It’s the food chain, right in her own backyard! (Science concepts are shared by a pair of very knowledgeable chickens!)

written and illustrated by Jason Chin

When reading Gravity, the first thing that struck me was the sparseness of the text. As Travis at 100 Scope Notes points out in his excellent review of this book, you just don’t see a lot of good nonfiction for the early primary grades. It’s a tough task to take a complex subject and break it down for our youngest students. There are only a few words on each page, but Jason Chin chooses the right words and has such rich illustrations that this is not a problem. He explains that this thing called gravity keeps objects from floating away from the Earth. Not only small objects like sand buckets and bananas, but also giant things like planets. Reading this book makes you want to say, “Phew, glad I have gravity!”. Of course, I could have used a little less of it when I was playing high school basketball, but let’s not go down that sad road. Chin goes on to explain that gravity not only keeps things from floating away, but within that same concept it keeps things together like the Earth near the Sun or the Moon near the Earth.

In the back matter, you will find two excellent pages that go in depth with more details about gravity. You learn why some objects have greater gravity than others and find out about the terms mass, orbit, and weight. Jason Chin does fantastic work as evidenced by his previous books. He is certainly deserving of an author study in K-2.

Here’s a cool experiment that I found on the Bright Hub Education site:

Students can explore how gravity affects objects as they impact the earth in a simple experiment using flour, a baking tray and a marble. Pour enough flour into the baking pan to create a layer one-inch deep. Spread newspaper under the pan of flour to make clean-up easier. Drop the marble onto the pan of flour. Carefully remove the marble from the pan and observe the crater in the flour. Drop the marble from different heights to test if the size of the crater will change. This experiment can also be done outside with rocks and a large area of mud. This experiment will allow students to better understand what happens when a meteor hits the earth. 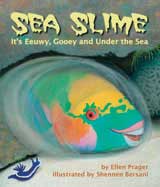 “Under the sea there is something gooey. It slips, slides, and sticks.” I love the way this book opens with alliteration – and the promise of something slimy and gross.

Lots of ocean animals, it turns out, use slime. It helps them go faster, find food, and avoid becoming someone else’s dinner. We expect sea slugs and snails to make slime. But clownfish?

Each page highlights a creature that uses slime in some way. From jellyfish to slugs to squid, the text and illustrations underscore the diversity of life in the ocean. There are so many cool creatures that I’ve never heard of, like the vampire squid that shoots beads of glowing goo from the tips of its arms.

At the back there’s more for curious kids: a page on “why slime”, a look at “lifestyles of the Wet and Slimy” and a recipe to make your own slime.

For some hands-on slimy activities, head over to Archimedes Notebook.

Looking for a fun way to connect science and reading? Why not head out for an alphabet nature-scavenger hunt. All you need is a pencil, paper and maybe a camera. And a willingness to look at things a variety of ways.

For example, would you call this a “dandelion” for D? or would you see it as “fluffy” for F or “seeds” for S?

This activity is good for your brain because it makes you observe things more closely, and think about how you name/classify things. Check out Alphabet Scavenger Hunt over at Archimedes Notebook for some more ideas. 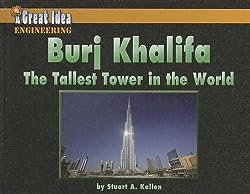 Burj Khalifa: The Tallest Tower in the World
by Stuart A. Kallen (Author)

Booktalk: Burj Khalifa is the tallest building in the world, with 163 floors rising half a mile into the sky. World records in construction and design were shattered when this engineering marvel rose out of the desert to reach the clouds above Dubai.

Snippet: The three tower cranes used to build the superstructure of the Burj Khalifa worked 24 hours a day. The cranes were positioned at the top of the tower as it rose from the desert floor.

“Gemina stood out from all the others at the Santa Barbara Zoo. She was the famous crooked-neck giraffe.”

Gemina didn’t always have a crooked neck. When she was born, she looked like all the other baby giraffes: wobbly-legged and nearly six-feet tall. But when she was three, a bump appeared on the side of her neck. It got bigger and bigger, and made Gemina’s neck crooked. The zoo veterinarians took X-rays and examined her, but no one knew what caused the crook in her neck.

Even with her crazy bump everyone accepts Gemina, from the other giraffes to the visitors at the zoo. Kids and parents and grandparents stand in line to offer her special giraffe biscuits. She makes kids feel better about themselves, like the boy with scoliosis who said, “That giraffe has a bump like me.” Everyone loved Gemina, and the let her know by sending her letters and drawings – some of which are featured on the endpapers. They also held a giant birthday party for her when she turned 21.

Head over to Sally’s Bookshelf where you’ll find some hands-on “beyond the book” activities and an interview with author Karen Winnick.